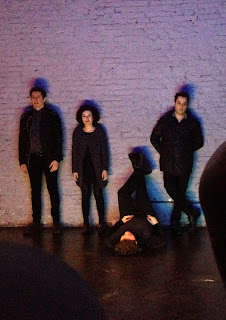 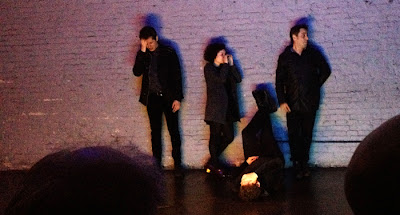 
I realized that this show isn’t the first time I’ve seen these techniques in Buenos Aires, even in very different kinds of productions.  I mentioned I think that Daniel Veronese’s Bergmann adaptation was basically very commercial and, to me, unremarkable.  But one interesting thing he did, in this conventional play which clearly takes course over the course of one long day, was never never pause the action or dim the lights, etc, to indicate the passing of time.  For example at one point we’re setting the table for dinner, but soon it seems as though dinner is over, though we haven’t stopped talking.  And by the end it seems like the middle of the night, though “passage of time” has never been specifically indicated.  Also, Claudio Tolcachir uses the same technique in the third act of Coleman— it's everywhere here.  A very nice kind of subtly non-literal stage time. 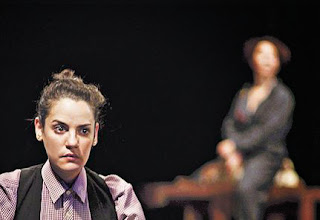 Then the other thing that Drut’s work on M de M reminded me of was this piece called Fauna by Romina Paula.  This one really deserves a review, it’s quite famous here, everyone loves Romina, she’s young and a movie actress and popular two-time novelist and Fauna is her third play (as writer/director in that BsAs way), each one more successful than the next.  (She’s beginning to get a bit of "over her" backlash in fact.)  But I liked Fauna a lot, it’s a very very smart and slippery play, about an actress and director who go out into the country to research a movie based on the life of Fauna, a late (and fictional) larger-than-life woman poet and cowboy who dressed as a man and was generally a badass.  They’re interviewing Fauna’s son and daughter and re-enacting scenes and things quickly get weird.  So it’s sort of about representation.  I’d be very curious to see how it resonated in the US.

As a director, Paula also stages Fauna with this great minimal elegance that BsAs theatre does at its best.  And the really interesting thing here was that on the page Fauna is a bit more conventional than Mal de Montaña, in the sense that the scenes happen in specific places, in order, and add up to a narrative.  But in her production Paula does the same thing with her own text that Drut did with Loza’s: mushes the scenes together so there are no gaps to imply passage of time or change of place.  And even more interestingly, Paula leaves all the characters on stage all the time, even when they’re “not there”—in some cases they're indicated or contemplated as someone talks about them, in some cases they sort of respond as if they “hear” something they’re not really “there” for.  Interesting.

In my opinion, Paula may have even gone a bit overfar with this device: the production got some laughs in places that I think came from the audience actually misreading who was actually “onstage” for a given moment.  But it was interesting to see this approach applied to a play that’s more or less structurally conventional on the page.  And applied by the playwright herself!  Put alongside the “no pauses between scenes” tradition here, what it adds up to is that, in subtle but key ways, average audiences here are comfortable with a more abstracted kind of stage space than we’re used to seeing on American stages.  It really makes me wonder how these kinds of techniques would resonate on conventionally structured American texts.  You know, Lindsay-Abaire, Auburn, Letts, Guirguis, Baitz, Greenberg, all these good playwrights who really aren’t formally innovative.

PS, of course there’s a way to think that this may all have been borne of necessity: when you have to strike the show every night (and also when you have little money), you need to imagine a stage space without literal sets, which maybe opens other doors…?
Posted by Sam Buggeln at 9:42 AM