Wow wow, well happy belated New Years everyone.  The 25 weeks are done but the blog remains.  I'd really wanted to get everything wrapped up blogwise before coming home, nice symmetry and all, but you know how it gets when you’re trying to cram things in at the last minute.  And these last posts should really be rounding up feelings, lessons, etc,— I do have them, but they’re so much work to pin down without being boring, and I'm so lazy.  Also, I saw maybe twice as many shows as I covered in the blog, and you can’t imagine the insightful, penetrating blog posts I was going to write about them and now won't.  So how about a couple of meta-blog posts, where I describe the posts that would have been? 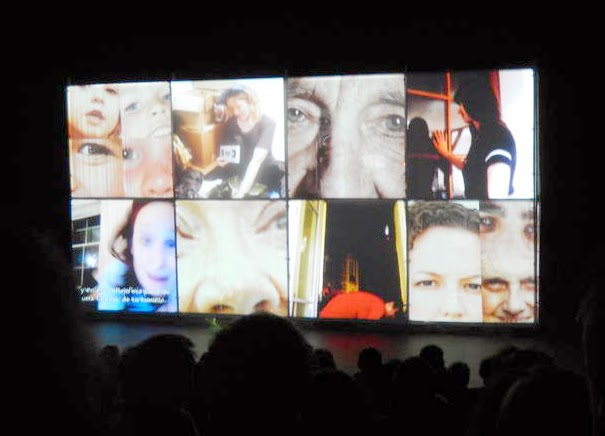 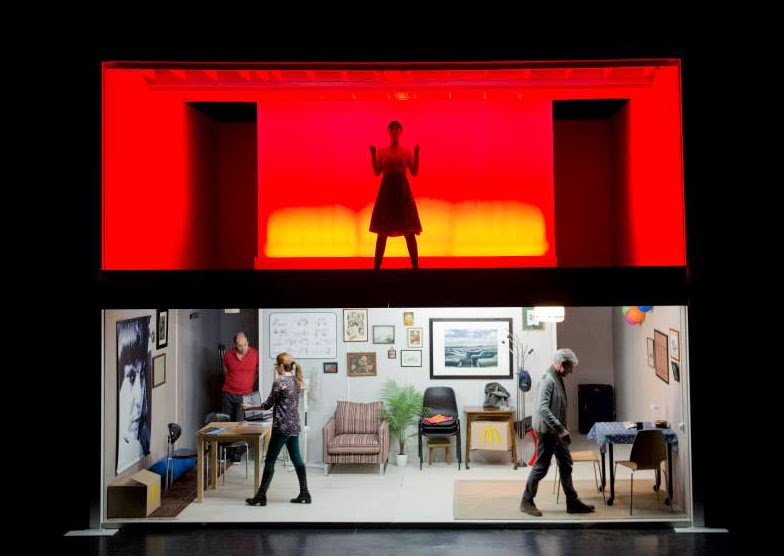 This has to do with FIBA, the huge international theatre festival that took place here in Oct.  Lots of international presenters come to see what’s here and whether they want to bring it to their city.  I saw a few pieces here that really felt part of that international world, for example unlike most other BA alt theatre in that it had big sets, lots of video etc.  First at FIBA I saw a translation of Martin Crimp’s Attempts on her Life (Atentados Contra su Vida)— I was grateful to get to know the Crimp play, weird that I hadn’t before, but didn’t care for the production, which was very “throw a lot of shit at the wall and see what sticks.”  Some stuck, but some sliid to the floor.  And it was all kinda different shit.  Next was Cineastas, by Mariano Pensotti— I liked this a lot, he has a very unusual thing where actors trade off smoothly between narrating the story (into a mic) and being part of it.  In this case, the play tells the story of five filmmakers, and the films they are making.  So, lots of layers.  This may well come to a theatre near you.  Finally: Distancia, by Matías Umpierrez.  Matías has become a good pal and I really liked his piece.  Truly experimental theatre.  The experiment here: can you literally make a play happen in a big theatre, via Skype, between four actors in different cities? (BsAs, NYC, Berlin, Paris).  Very tricky, very ambitious, very exciting.  Matías will be in NYC this summer in the Under Ground Zero fest with a different project, keep an eye out for him.

The Father and Child of Viejo, Sólo y Púto post: 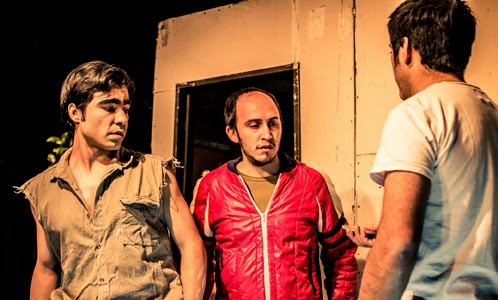 This would have been a wonderful post in that it was going to highlight the BsAs theatre scene’s strong feeling about lineage.  I talked about how VS&P was an unusual kind of play by US standards.  Well, as soon as I started to read Sudado (Sweaty/Sweating) it felt like the same kind of piece: extremely hard to read on the page, and making a lot more sense on stage, where it has a lot to do with unspoken dynamics.  Same very raw feel.  Sure enough, the director/creator of Sudor was the assistant to Borís as he created V,S&P.   Sudor is also about working-class oddballs, this time renovating a Peruvian restaurant, and (shocker!) there’s a Peruvian actor (read: un negro, not at all in the US sense of it) in the cast, which everyone felt was a big progressive deal around here.  Sheesh.

So if that was son of VS&P, Father of VS&P would be Ricardo Bartís’ La Máquina Idiota (The Idiot Machine.  He’s talking about theatre.)  Bartís is a huge icon here— among many other people he mentored Sergio Boris, and when people here don’t care for VS&P (everyone here is opinionated, which is great), they say it’s because it’s warmed-over Bartís.
In the meantime, if Bartís pioneered theatre like VS&P and Sudor, he’s moved on somewhat.  This piece shared a certain rawness and loose structure with the above plays, but rather than being verité, it was dreamlike.  Premise: The main cemetary here has a special section for Argentina’s most celebrated performers— and surrounding that section, an unofficial section for its hard-toiling unfamous performers: vaudevillians, magicians, B-List actors, what have you.  The play is set among these secondary ghosts, as for some reason they try to figure out how to rehearse Hamlet, but they don’t have a script.  It’s a neat concept, and was a beautiful show to look at.  But I can’t tell you in any detail what happened in it, because besides being famous and an icon and all that, Bartís is also famously a dickhead irascible, and is literally the only person in Buenos Aires who when I emailed and asked if I might read his script before seeing his show, politely replied, through an assistant, that I might fuck off. 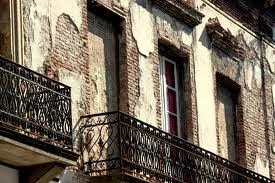 Strange that there were enough of these to make a post, right?  We were living in San Telmo, the oldest and most decrepid-glamour neighborhood in a decrepid-glamour city.  In one two-week period we saw two different pieces in decrepitly glamourous buildings of the hood, both of which were composed of elements of dance, elements of promenade-installation, and and broad swaths of hooey.  So, you know, I won’t name any of the players in these, and the nice thing was that it felt like I imagine Soho must have felt in the 80’s.  Lots of “atmosphere,” space was cheap, inspiration was everywhere, and god knows you were going to see a lot of nutjobs before you discovered the next Grace Jones.
In fact I can add a third play to this list, if the post is simply to become “bad theatre.”  It wasn’t in our neighborhood, and it was a normal sort of play, if by a normal play you mean one inspired by the writer’s work as a Tarot card reader, a very serious melodrama about a family of psychics, wearing unironic sparkly cloaks.  But again, it was nice to see space available to young people trying stuff out.  No room for that in post-Bloomberg NYC!  Off to Detroit with you all! 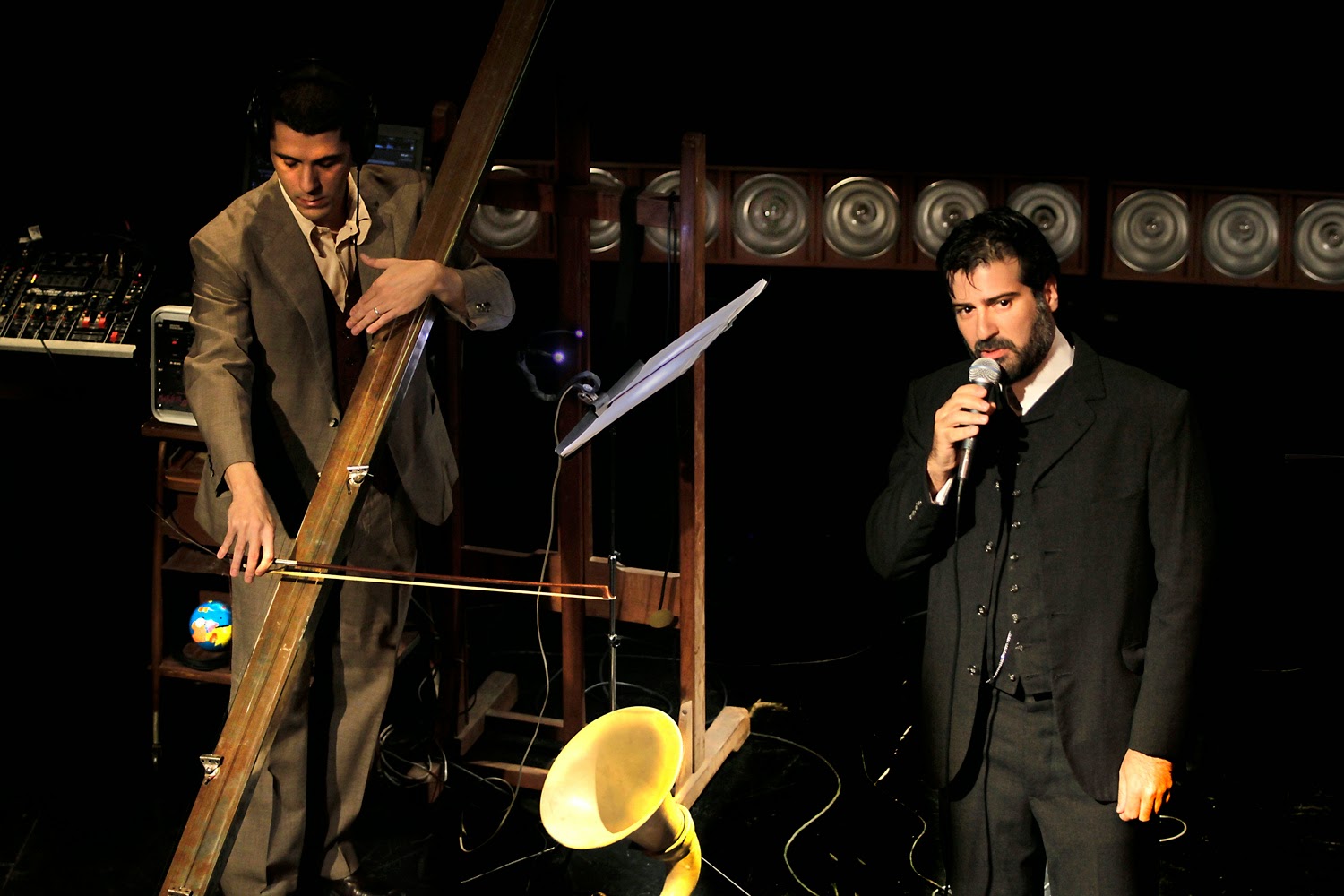 This is the most ridiculous one to have not written at the time, because alongside Loza (and maybe a couple others) Rafael Spregelburd is one of the writerly voices I enjoyed the very most here.  I saw his shows SPAM and Apátrida, and read a number more.  His writing is a bit atypical for Argy plays, which tend to be short— he writes big sprawling pieces, very funny and full of intellectual curiosity.  Very heady playwright, which puts him right up my alley.  Don’t take my word for the quality, though: he’s by far the most internationally-produced Argentine playwright.  But of course that only means Europe and the rest of South and Central America know him, not the US, because you know, U! S! A! U! S! A!  Why would we care about plays not written in English?  We’ll see what we can do about that.  Stay tuned!

And stay tuned, too, for one more meta-post before I wrap this project up…
Posted by Sam Buggeln at 9:23 AM