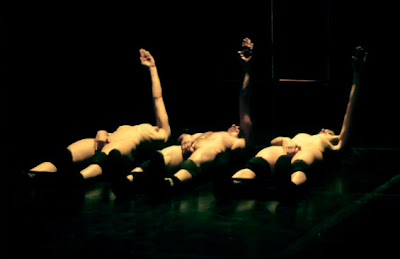 The biggie of the genre down here: “La idea fija” (“Idée fixe” or maybe “the obsession”).  Been running for like 5 years, something of a sucés de scandale.  A dark and dramatic and occasionally funny meditation (in my reading of it) on club hookup casual sex, or maybe sex writ large.  Among other things this show demonstrates that it’s as true in Buenos Aires as anywhere else that if you make— and advertise — something dirtysexy enough, lots of people will buy tickets.  Which is really an overly cynical response to a piece that we did enjoy.
The dancing is virtuosic and quite brutal, lots of people throwing themselves at the floor, the walls, each other— lots of nudity (of course— you quickly get desensitized), lots of violent self-abusive kinds of movement.  There was stuff that felt super overmelodramatic to our jaded North American eyes (that does happen here pretty regularly) but then some wildly funny goofball stuff that took the piss and rounded out a theatrical context for the Drama parts.  In the end we liked that it felt Queer with a capital queue (which btw is french for dick).  Like, Hello, tonight we’ll be serving angry-sexy, tragic-sexy and goofy-sexy, we’re piling them all on top of each other, turning it up to eleven and leaving it there for the duration.  Enjoy, suckahs! 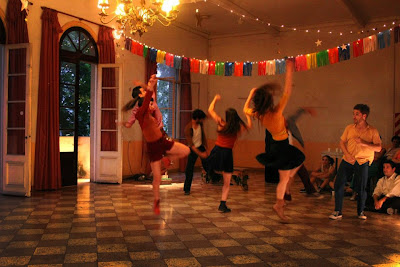 Second: Villa Argüello— this was neat, it never would have gotten on our map but we got a tip.  Having heard that it was mostly dance, we brought my brother Brendan and sister-in-law Tori to see it on their first night here, and, well, there was a little more talking than I’d been led to expect which was kind of OOPS, but in the end a good time was had by all.  A charming gang of youths from Córdoba— Argentina’s second city, and Chicago does seem like a pretty good comparison.  So it was about the kind of exile that Córdoba kids feel who moved to Buenos Aires to do theatre, the accent they may be trying to lose, and moreover, nostalgia for high school/young adult life in Cordoba’s neighborhoods, each of which has a hand signal and when you grew up in that neighborhood that is your sign.  And most of all, nostalgia for this kind of youth dance party that would happen in community centers in these sometimes seedy neighborhoods, where they drank “fernecola” (the very Argentine apereitif Fernet and coke)— and, well, you can picture all the kinds of stuff that might happen at neighborhood youth dances.  And the performance actually took place in a big hall at a community center far from the center of BA, which really worked. So it was very “you can’t go home” and wistful (“I think [visiting home is] like having a wire fence inside, like the ones that separate the sierras, posts made from branches, and thin wire—you can pass under, come and go easily without anyone saying anything, but all the same you know the wire is there.”)  But at the same time exuberant and charming.  Go kids. 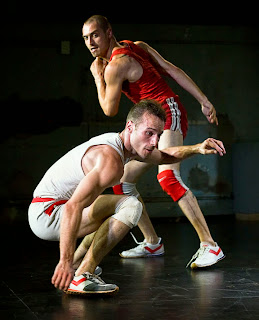 Last:  Un Poyo Rojo (“Red Rooster”)— we had a great time at this one, having been directed to it by everyone from my massage guy to some visiting dance scholars from Northwestern who we had drinks with.  (Hi, Ramón and Joél!)  This was also delightful, a two-hander, very gay.  It was doing a lot of things, kind of a series of dance sketches each with a different animating principle, but it had a lot to do with gay desire and locker rooms.  Which sounds potentially heavy, but it was actually hilarious as well as sexy, because the two guys, while good-looking and often in states of undress, are also thoroughgoing clowns, which is much sexier than the sexiness that takes itself seriously.  One of the coolest things was that some of the best segments were largely improvised, including two bits that were performed entirely to a soundscape devised in the moment by actually twiddling around a radio dial and building a kind of story around the random shifts from dramatic power ballads to cheesy self-help talk radio to UMPtssss UMPtsss UMPtsss UMPtsss dance music.  Not something you see every day.  I hope this one tours to the US, and the world for this matter.
Posted by Sam Buggeln at 8:26 AM