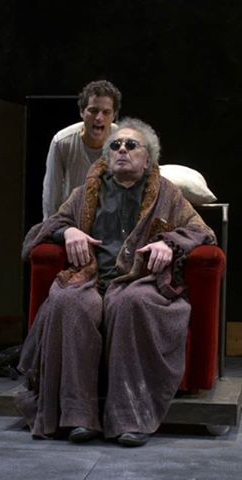 
Dude who played Clov (Joaquín Furriel) was quite a bit younger than I'd have thought, could have been Hamm's grandkid.  It turns out he's a telenovela guy!  Because the San Martín is a state-sponsored theatre and therefore supposed to make Art that rises above commercial concerns, the presence of a telenovela actor there in Beckett was seen by many as the ugly imprint of BsAs right-of-center mayor.  I couldn't fault it too much myself, seeing as Furriel did a fine job, and at Lincoln Center both would have been TV/film actors (Alan Alda and Woody Harrelson?  Actually I'd see that.)

Most cooly, it was Nick's first day here!  And closing night for the show, so like a trouper he read the play (in English) on the plane and saw it with me.  Apparently this works well for him as a way to see theatre (he was laughing along with me at the funny bits) so I'll have company for at least some of my theatre evenings out.
Posted by Sam Buggeln at 10:42 AM