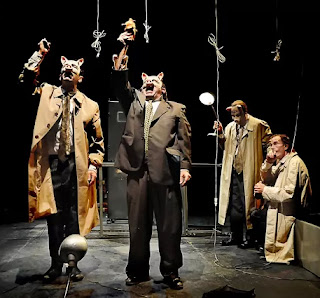 The photo makes this look better— or at least more interesting— than we found it to be. A Spanish company called La Zaranda, they do a super old-school '70's Agosto Boal/Tadeusz Kantor poor-theatre Marxist political critique thing.  And nothing wrong with that, but a) while this sort of show is designed to be seen in a raw warehouse space right in front of you, it toured here to the enormous and slightly ridiculous national Teatro Cervantes, so we saw it from about a mile away; and b) I couldn't secure the texto in advance, so I understood about half of the talking and Nick about none.  So chalk it up to experience. 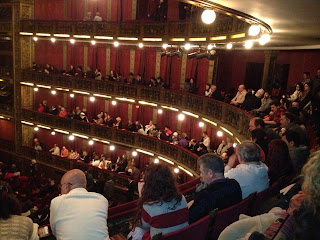 The Cervantes was a fascinating trip in its own right.  Built in the 1920's but to look like serious Don Quijote level colonial Spain.  (Gift of the Spaniards, naturalmente.)  It's an old-school opera house, pretty much exactly the way they were laid out in Louis XIV's time, and though we had pretty good seats as mentioned we were a mile away from the stage.  The cool thing was that the view from our seats illustrated the following principle more clearly than I've ever experienced: when these theatres were first designed, it was literally as important to see the other audience members as it was to see the stage.  See photo.  (Which leads to the question, when will we finally stop building these theatres?  I'm looking at you, Schwartz Center.)